By btrdpt on November 18th, 2013 in Uncategorized | Leave a Comment

I’m not really sure why I built this router.  At the time I had no immediate need for it.  I think  it was my dad’s fault. He was a master engineer/hacker/builder/pennypincher. After he died I inherited quite a few boxes of his tools, parts, uncompleted projects, junk, and memories, and it was when I kept trying to thin out these boxes, that I kept running across a few assorted little stepper motors.

At the time I was cutting out guitar bodies on the bandsaw, and knew other people who were using CNC routers to cut out Telecaster bodies and though that was pretty cool.  I knew nothing about CNC, but started hanging out on the CNC Zone Forum learning about this stuff.  After a while I invested $60 in a stepper control board, and decided if I could get down the process of drawing a simple circle in a CAD app, turning the circle into a list of coordinates, and then watch the motors move to those numbers, I’d start building the router.  I thought it would be smarter than building the machine first then finding I was too dimwitted to get anything to move-lol. So in the past year I’ve only cut one guitar with it, but I have cut plenty of airplane parts, do-dads, geegaws, and thingamajigs with it.
Here’s some pics od it in progress and a video cutting stiffer spindle mounts.

Including PC and software, the whole thing probably cost me around $700 and a couple months to build. The router plans are at http://www.solsylva.com .  The controller is a $60 Toshiba tb6560 from ebay.  The major costs were 1/2″ Acme dual thread  and the Acme zero-lash nuts from http://www.dumpstercnc.com and the stepper motors from http://www.hobbycnc.com .

Old pics from the airplane shop

By btrdpt on November 12th, 2013 in Uncategorized | Leave a Comment

It’s much uglier now.  Cant even walk down there.  It’s a balsa dust shithole. 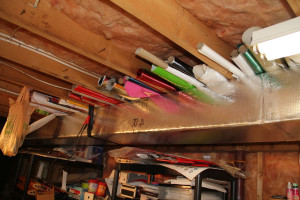 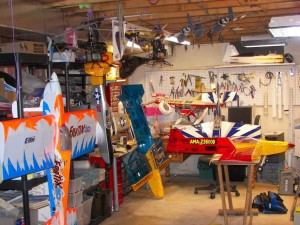 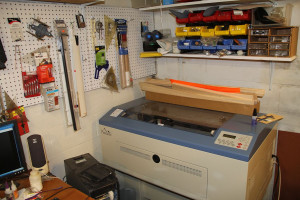 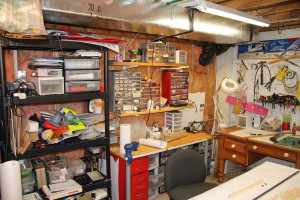 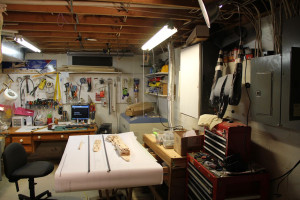 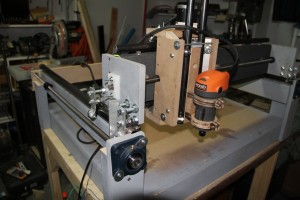 By btrdpt on November 12th, 2013 in Uncategorized | Leave a Comment

It’s all done, the smallest RC plane I’ve built. 27 inch wingspan for indoor and backyard flying.  Dirt cheap electronics, no extra weight-loss measures (ie- no carbon fiber pushrods, no cellfoam, no contest weight balsa) , 2 cell 800mA battery, 1800kv motor from my Chinese cousins at HK,  towerpro 5 gram servos, 1.5mil doculam covering.  CG was a bit too far back for my tastes and some shuffling is called for, but it’s a hoot to fly this little bat.

Thanks to Ron at the Probro forum for the plans. The build thread is here:  http://www.theprofilebrotherhood.com/forum/viewtopic.php?f=20&t=33132

I deviated from the plans by using a NACA 0015 airfoil. I  lasercut a dual-taper rib pattern from 11″ to 7.5″ chord.  http://airfoiltools.com/airfoil/details?airfoil=naca0015-il   If anyone wants a ribset cut let me know…. it’s already in the computer. 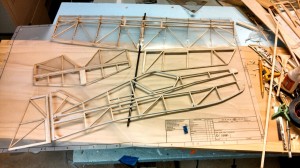 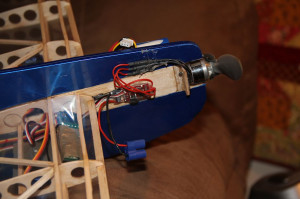 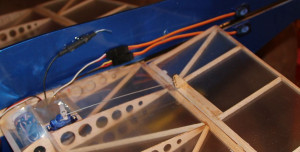 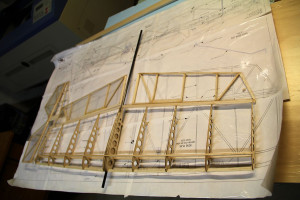