By btrdpt on February 18th, 2014 in Uncategorized | Leave a Comment

This is a new antenna I invented. At the lower frequencies it acts like a fat monopole, and at higher frequencies it’s a tapered slot antenna. it shows a very nice SWR below 2:1 from 150MHz to 10GHz. Of course I didn’t invent either type, but I’m  positive I’m the first to combine them into one antenna. 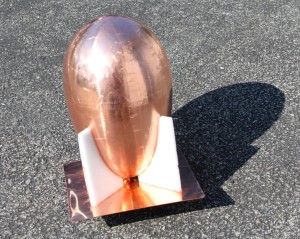 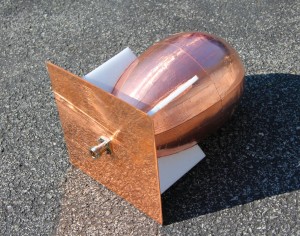 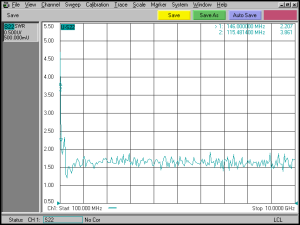 Below are pics of a 12DBi helical. I made the helix support from laser cut lexan. The first 1/4 turn feed transition was the critical part in tuning. 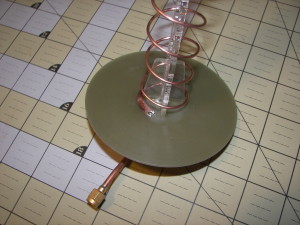 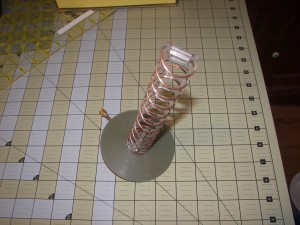 Below are more variations of the tapered slot / fat mono.  The one in large blue foam is an extended low frequency model. With the larger ground plane and copper tape “top-hat” it’s now usable to 70MHz. 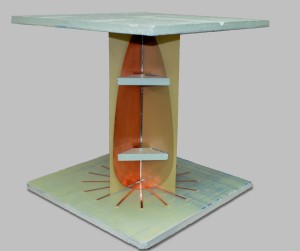 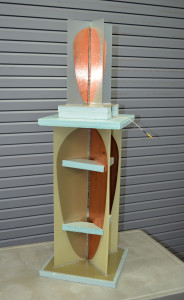 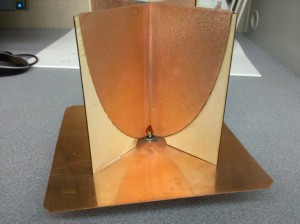 For my Ham Radio HF station I made my 4:1  balun for my Off-Center-Fed antenna. The core is a 140-77 ferrite, wound with teflon wire. Plots shown with 200 Ohms on output.  So far good for a couple hundred watts. 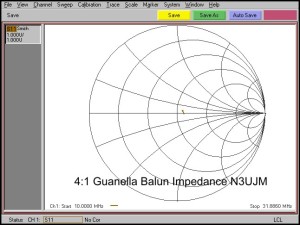 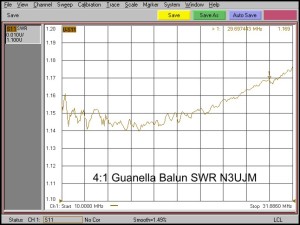 Power supply puzzles for the Taranis

By btrdpt on February 12th, 2014 in Uncategorized | Leave a Comment

I was thinking about installing a 3S lipo in my Taranis.  The optimistic thought was besides longer run time, maybe there could possibly be a teeny tiny increase in output power resulting from a sloppy regulator that allowed more voltage to the RF board.
BAAAAAAA!!! Wrong answer Hans!
On the bench with a lab-grade 10A variable power supply showed different.   I ran this test 3 different times with different bandwidth settings, and different antenna orientations, and it’s repeatable and constant.  The RF circuit seems to be more efficient when the radio DC power is at a lower voltage.  Running at 12VDC shows almost 0.5 dB decrease in RF output power as opposed to 7.2VDC.   Maybe it means nothing, maybe it’s just my radio… what’s half a db between friends, I found later that at 12volts, there is about twice as much ripple and noise (.06v)  on the rf board voltage compared to 9volt input. One of the universal truths in radio design…Poor power supply=poor RF. 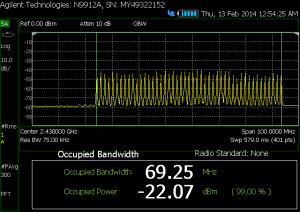 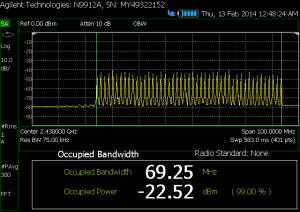 The next issue is notable.  You see 3 different color traces in the plot below. The Orange trace shows a baseline output plot from the Taranis with no audio playing.  The Yellow is a plot while audio wave files like – low rates, high rates,  gear up, ect were playing constantly at full volume.  The Aqua trace is the RF output while music is played at full volume. There seems to be about a 1.5dB decrease in power while loud audio is playing.    Again, I aint sayin’ nuthin…  Just thinking about power supply current shortcomings. I’m going to re-do this test after I record some constant-tone wave files. 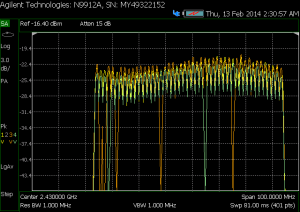 Lastly below, for edumatainment purposes, and not just for X9D owners, I did a plot of antenna polarity coupling to show the  importance of never pointing your antennas at each other.  Think of the co-pol as both antennas pointing straight up, then laying ONE down 45 degrees sideways, then 90 degrees sideways, then finally pointing each antenna end-to-end.  You’re losing 13dB  by doing that.  That means your 100 mW signal is now 5 mW, and you STILL have to calculate the distance path loss to that faaarrr away model.  It’s brown short time. 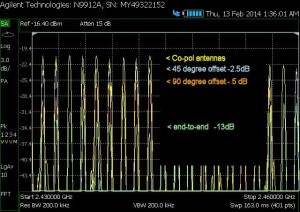 By btrdpt on February 10th, 2014 in Uncategorized | Leave a Comment 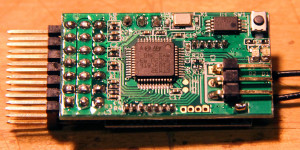 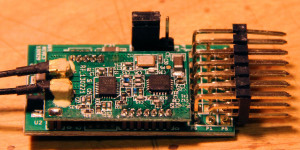 I was working at the bench and heard a crunch under my bigass workboot. I accidently stepped on a receiver that must have fallen off the bench and cracked the cover off. Oh well good opportunity to check out the innards.  Looks like it survived just fine.